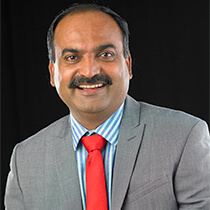 A qualified engineer and Guinness World Record Holder with immense logical knowledge. Started journey with MSEB as a Trainee Engineer and moved to corporate. For him, each client is a new lesson and new success story to learn. Being an Engineer analytical skills helping to do the SWOT analysis. Completed Business coaching by Manish Gupta – Chrysalis Business Solutions. Active Council Member for Chrysalis Entrepreneur Forum. For spirituality and work life balance following Sadhguru. Also did TAT course of Infinitheism . Attended 4 day workshop ISHA IISIGHT 2015 under leadership of Mr Narayan Murthy and Sadhguru. Positive energy with positive mind stabilized as one of the driving force since 2005. Also in a social activity to adopt poor students for education.

M.Sc. degree holder from Mumbai University, started his corporate journey with Jain Irrigation Systems Limited in year 1992 and worked with noted organizations such as Photon Biotech Limited ( a sister concern of Pravin Masalewale & Chordia Food Products Ltd) as a production manager and developed good contacts through carrying marketing assignments, which in later period helped him to start new venture. He ventured into Green House constructions in the year 1999. Where he served 20+ renowned seed industries and Biotech companies all over India. Bank funding for Green House projects was a supportive activity as it comes under the Priority Sector Lending category for banks. Due to this priority sector lending activity he developed good contacts with the bankers. Eventually he has evolved into a Corporate Loan Advisor for multiple industries and is one of the key driving forces behind Capital Den Advisory LLP since inception of firm in year 2005.